…exploring ClassLoader trees in the forest of actors…

PraxisCORE v5.2 added the ability to share code and types across components (actors) in a graph. This is a feature that’s been requested for a while, but took some thinking to work out how to implement. And it’s a key ingredient in how Codelerity is supporting general purpose programming usage of the PraxisLIVE suite of tools.

It’s been possible to add compiled libraries to PraxisCORE projects for a while, even at runtime, and v5.1 added the ability to include dependencies from Maven Central. However, such pre-compiled code is not editable. With the shared code feature we want to allow components to share features and types, while still allowing that code to be rewritable safely at runtime like the code of individual components. 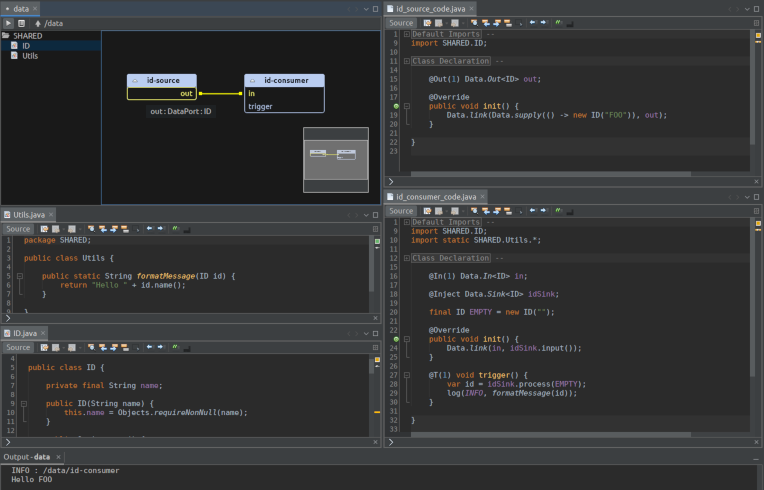 Here we have a simple example of shared code usage in PraxisLIVE v5.2 (click to enlarge). We have a shared ID type passed between two components, id-source and id-consumer using data ports. This is somewhat contrived as data ports are usually used for packets of continuous data. We also have a shared Utils class for utility methods that can be static imported into our component code.

The problem to be solved was allowing the shared code to be edited and recompiled at any point, while ensuring that at any instant, all components in the graph are linked to the same shared type. We also want to ensure that any changes to shared code are always valid - not removing types or methods in use by any component.

Part of addressing these concerns is the limitation that shared code is only shared across the components within a single graph / root. As within our forest of actors architecture each root is guaranteed to be only active on a single thread at any time, we can ensure atomic replacement. It also shields us from having to deal with the problem of some roots being local and others remote. Shared code is currently stored as a property of the root component, although in theory we could also support shared code on sub-containers.

Implementing shared code involved some rethinking of the ClassLoader hierarchy used for dynamic code in components, as well as significant changes to the compiler service and other services used in the updating of component code.

In versions of PraxisCORE prior to v5.2, we have the following (truncated) hierarchy of ClassLoaders for each component.

The system ClassLoaders are obviously the JDK and modules that make up the PraxisCORE runtime, on modulepath or classpath. The library ClassLoader is used for adding pre-compiled libraries to a project, or strictly to the RootHub - this is currently a subclass of URLClassLoader that allows for dynamic addition (not removal), and there is a single instance that exists for the lifetime of each hub.

For more on the use of code delegates to support real-time programming / code hotswap see the related post on Just-in-Time Programming systems in Java.

From v5.2 this ClassLoader tree has changed - we now have a shared code ClassLoader inserted in the hierarchy.

That is, some component ClassLoaders may now have the shared code ClassLoader as a parent. As mentioned, shared code is currently attached to each root, so we now have a ClassLoader tree that roughly follows our forest of actors hierarchy - system (process) → library (root hub) → shared code (root) → code delegate (component).

PraxisCORE has the concept of Protocols, akin to interfaces exposed by actors, and Services that are Protocol implementations that can be registered and located by other actors. There are two services involved in runtime code updates - a service that can create new CodeContexts (wrappers for CodeDelegate instances loaded from the above mentioned ClassLoaders) and a service that exposes the Java compiler. Both work with source and bytecode in memory rather than on disk.

The context service deals with actual Java references so must be in the same process (so one will exist in each PraxisCORE process across a distributed hub). The compiler service can run in a separate process, or even on a separate machine, so there will usually only be one.

Prior to v5.2, the compiler service accepted a single Java class body (ie. no imports, class definition, etc.) and the class name of a type that could be used to assist in wrapping the class body into valid Java source for compilation. A legacy of an earlier iteration of compilation where everything was handled in-process, this had the limitation of not working for full Java sources, or multiple classes. For v5.2 the compiler service was extended to accept a map of Java sources to compile. It can also accept an optional map of pre-existing classes to compile against.

The context service had to be rewritten to handle the wrapping of class bodies itself, as well as extended to provide a shared code context service that also handles recompilation and reloading of all dependent component code. This also required changes to how classes are identified. Assume a component with the following action -

In versions prior to v5.2, if you trigger that action you will see -

Every component with custom code prior to v5.2 was backed by a delegate class named $ in the default package. This was fine, because a class is actually identified by both its name and the ClassLoader that loaded it. However, now we want to support compiling multiple components’ code at the same time, along with our shared code, we have a problem. Instead, we switch to a package name based on the component address, with a partially randomized root package (a255 here is random hex).

Going back to the basic patch shown in our image above, whenever the .code property on id-source or id-consumer receives a new iteration of code, that code will be sent to the code context service actor. That actor will wrap the code in its context, adding default imports, package location (eg. package CODExxxx.data.id_source.code;), and class definition (eg. class $ extends CoreCodeDelegate). This source will then be passed to the compiler service, along with the previously compiled bytecode for the SHARED package. On successful response, the compiled code delegate is created, wrapped, and passed back to the component.

On the other hand, when the code of either ID or Utils is updated, the .shared-code property will collect all shared code dependent components (in this case both id-source and id-consumer) and pass their source along in a task for the code context service. The service will wrap all component code as before, and add to a source code map along with all shared code, for passing to the compiler. On successful receipt, the returned bytecode map is partitioned to create the shared code parent ClassLoader and each individual delegate ClassLoader. Delegates are created, wrapped, and passed back in one message for atomic replacement. As the process is asynchronous, the response is validated against the current graph before each component is updated.

Whether or not a component is compiled and loaded against code from the SHARED package is currently triggered by a search for the String "SHARED." in the source code. This obviously has the possibility for false positives - it might change in future!

A note on Data

Data ports allow for continuous data packets to be passed from one component to another. They are typed by their generic signature, and if that changes then the configuration is invalidated and all connections are removed. Because class identity is actually a product of name and ClassLoader, this would have caused all ID ports to be disconnected on every shared code change. In v5.2 data ports have been updated to retain connections where the type is in the SHARED package and has the same name - atomic code replacement ensures that an ID.class reference is always identical across all components at any one time.

The PraxisLIVE IDE has been updated to support shared code editing - right-click on the graph editor to show / add shared types. PraxisLIVE uses Apache NetBeans’ memory file system to allow editing of shared types in the same way as used for component code. The shared code memory file system is separate to the ones used for components, but added in to the IDE’s class path support in a similar hierarchy as used in PraxisCORE for class loading. One difference is that shared code is always included in the class path, so that completion and code navigation works, whether the code currently references shared code or not. Imports will be correctly added on code completion if required, and CTRL-click on shared types or their members will open them in the editor.

As you might gather from the length of this post, finding the right way to implement shared code was complicated and took time to get right. However, it really opens some interesting options for the future as we expand general purpose coding support in PraxisCORE.

One initial thing currently being looked at is using shared code to support component prototypes - effectively a way for multiple components to share the same code, but keeping some ability to override at a component level.

Keep an eye on the docs for shared code as these features evolve.